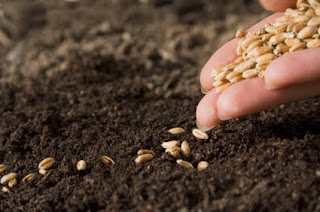 There was an American game show on TV years ago, called Truth or Consequence.  In this game, the contestant had to answer a trivia question that most people would not know the answer to.  If they got it wrong, as most contestants usually would, then they had to play the second part of the game, since they did not tell the "truth." In the second part of the game, the contestant was required to perform the consequence.  This was usually some stunt to entertain the audience.

Today I want to talk to you about sin and consequence. In other words, I want to try and show how sin has very serious consequences.  Unlike the silly game show, when we sow sinful seeds through our words and actions, we most certainly reap the consequences for them.  And the consequences are not to entertain you, God, or anyone else.  They are unpleasant and sometimes deadly.  This is the immutable law of sowing a reaping, just as when you plant seeds in the soil and eventually reap what you sowed.

The book of 2 Samuel is full of examples of sin and the consequences, even the domino effect it causes.  Just take a look at the examples below and observe the progression from the initial action to the final outcome:

Abner’s Actions lead to his murder

Michael’s contempt lead to her barrenness

Ammonite’s contempt for David lead to their defeat

Putting it All Together
This book is full of murder and revenge, sexual immorality and the resulting rape and adultery in David’s family.  It is a great illustration of how sin will always take you further than you want to go, cost you more than you want to pay, it will keep you longer than you wanted to stay.

“Do not be deceived, God is not mocked; for whatever a man sows, this he will also reap. For the one who sows to his own flesh will from the flesh reap corruption..." (Gal 6:7-8a)

If you have realized one or more areas where you've been sowing to your sinful nature, there is only one solution.  Only Jesus Christ and faith in Him can set you free.  True and sincere repentance with contrition and tears will break the cycle of sin and the Lord will set you free. I'd like to encourage you to do that today.

You will still have temporary consequences to deal with, which could last the rest of your earthly life, but at least you can stop sowing to your own destruction and avoid eternal, fatal consequences.  And if you faithfully follow the Lord the rest of your life, He will give you grace and peace.  He will also enable you to sow to please the Holy Spirit, and then you can begin reaping the good consequences. "The one who sows to the Spirit will from the Spirit reap eternal life." (Gal 6:8b).

Attribution notice: Most Scripture quotations taken from the NASB. The photo of sowing seeds is from Christinas View - Love Like Crazy

Author's note: If you enjoyed this post, you may also like the other posts in this blog available through the Home page for this blog, and you can also find my complete blog directory at "Writing for the Master."

Do You Want to Know Him?
If you want to know Jesus personally, you can. It all begins when you repent and believe in Jesus.  Do you know what God's Word, the Bible says?

Len Lacroix is the founder of Doulos Missions International.  He was based in Eastern Europe for four years, making disciples, as well as helping leaders to be more effective at making disciples who multiply, developing leaders who multiply, with the ultimate goal of planting churches that multiply. His ministry is now based in the United States with the same goal of helping fulfill the Great Commission. www.dmiworld.org.
Posted by Len at 5:04 AM